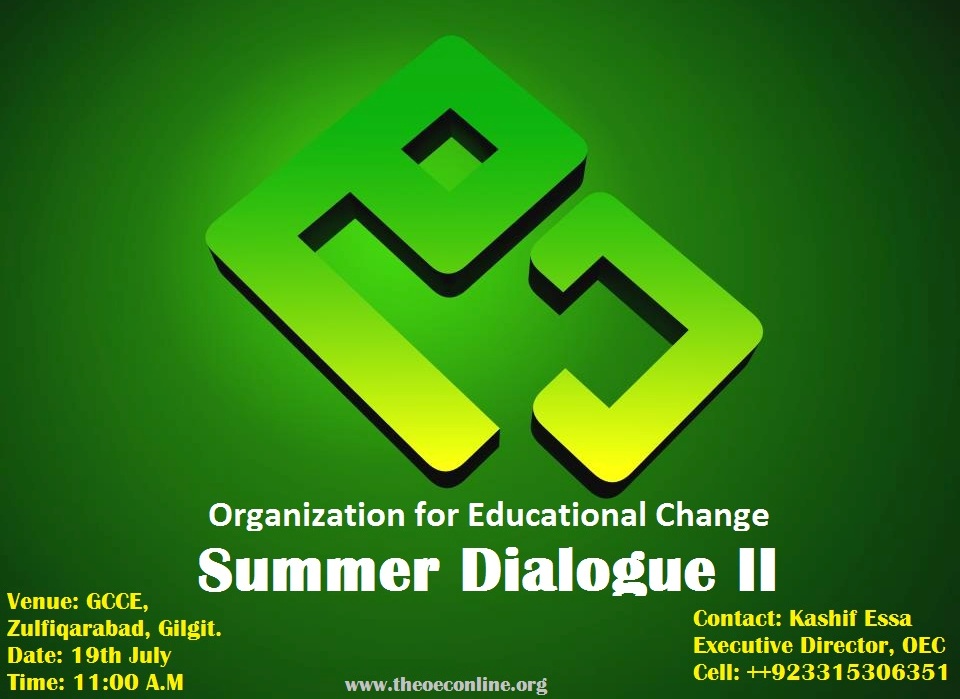 All set to kick off with

In an indigenous effort to carve out a long run vision for itself, OEC team started a series of dialogue sessions early this summer. The first session of series held at De Papay Hotel Islamabad in first week of June 2012. Patron In Chief, Mr Saranjam Baig, Good Will partners, members of Monitoring and Advisory Council, officials of Executive Council along with senior and junior members of Organization for Educational Change attended the session. They discussed short and long term goals for each of its projects. However, the session concluded leaving further debate and discussion for forthcoming sessions.

To continue with its series of sessions, team OEC has decided to get assembled at GCCE, Zulfiqarabad Gilgit for Summer Dialogue II. It will resume the discussion and debate on its long term goals and operational plans where it was concluded earlier in session one of Summer Dialogue. All arrangements have been done. Mr Kashif Essa, the Executive Director and Miss Bushra Ali, the Information Secratory of OEC will coordinate the event in supervision of Patron In Chief Mr Saranjam Baig. This time, it has invited well reputed intellectuals and professionals along with students to float ideas and suggestions to develop a sustainable and viable operational plan and a comprehensive vision for entire organization. By end of the summer dialogue series, team OEC aims to come up with a well debated and drafted document of its vision for next 30 years  named as “OEC Vision 2040”.