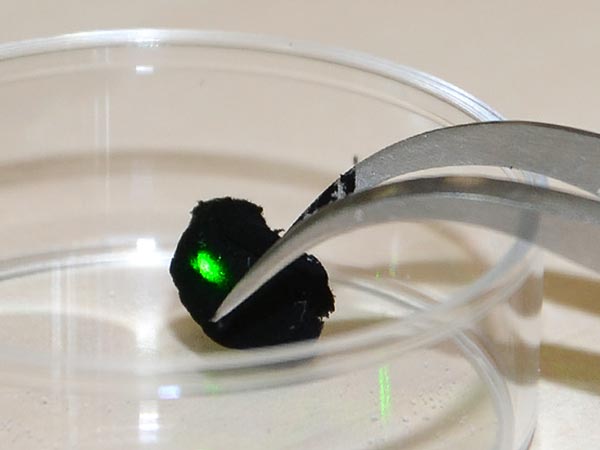 Jet black and highly porous, a piece of Aerographite almost completely absorbs the beam from a green laser in a 2012 picture.

The new champion in the “lightest in the world” category, the carbon-based material is the recent creation of a team of scientists from Germany’s University of Kiel and Hamburg University of Technology.

“Even very thin specimens of Aerographite are fully opaque for the eye,” said Hamburg’s Matthias Mecklenburg.

Unlike a sponge, which would “leak” or “glow” any light aimed at it, Aerographite is “not a bit transparent,” he said.

But, he added, our hands would hardly register its “fluffy,” spongelike surface, because the innovative material is practically weightless.

Electrically conductive and lighter than the previous titleholder—a nickel-based material introduced earlier this year—Aerographite has promising applications in the engineering of batteries and water-purification systems, as well as in biotechnology.