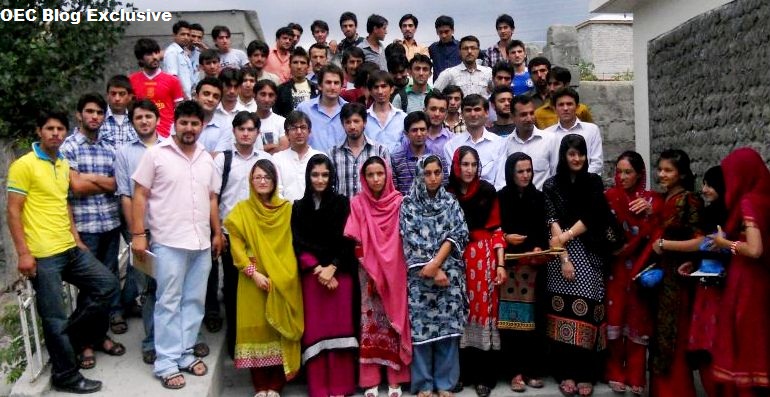 After, successfully conducting the first session of OEC Summer Dialogue, OEC conducted the second session of OEC Summer Dialogue in Gilgit at Gilgit College of Commerce and Economics (GCCE) on 19th July from 11am to 2pm. The session was open to people of all ages. More than 100 students along with OEC members and good will partners attended the session. Goodwill Partners who attended the session included Mr.Mehfuz Dar, Mr.Sajjad Haider and Mr.Shah Zaman. The Patron in Chief, Mr. Saranjam presided over the session. The Summer Dialogue is an initiative of Mr. Saranjam Baig, who started it with an aim to find out “where we want to see OEC after 30 years”. This 30 years planning of OEC has been named “OEC VISION 2040”. The dialogue was welcomed by the audience who participated energetically in the session.

After discussing the outcome of the first session of OEC SUMMER DIALOGUE participants have suggested the following points. OEC OEC will be a center for philanthropy. OEC will have no luxurious offices and vehicles. More and more members will be inducted in to OEC and OEC will develop itself in to a brand name for other organizations to emulate. Educure Participants of the OEC Summer Dialogue II agreed with the conclusion of the first session that Educure magazine will evolve into a research journal which will publish research papers. Moreover, the participants emphasized that Educure should be available in the far flung areas of GB. OEC BLOG As discussed in the first session of OEC Summer Dialogue, OEC BLOG will help to develop a habit of reading among the youth. Pictorial depiction of things will be uploaded on the BLOG. A student suggested that OEC BLOG should also work on documentaries instead of focusing on conducting interviews.

Participants also suggested that a large bulk of the material present on the BLOG should be available in printed form. Apart from discussing “Vision 2040” participants also shared their success stories and their views about vision and education. Mr. Mahfouz told the participants his life story and the difficulties he faced during his education. Mr. Shah Zaman expressed his views about Volunteerism and his inspiration for creating the MILKY WAY Foundation. Mr.Sajjad Haider gave a brief background of OEC. He spoke about his first meeting with the founding members of OEC. Mr. Rashid Ali Haideri, an OEC Scholar, spoke about education and what education can do for society. The audience asked different questions from the OEC members. Students asked the members about the diversity in OEC and suggested that OEC should include members from all parts of GB. A student raised the issue that OEC awards scholarships to only those students who studying in the best universities of Pakistan, what about the students who could not get in to such universities?

Finally the Patron in Chief, Mr. Saranjam Baig concluded the session with the words that “dream big and never back down in the face of failure.s Failing is not failure; failure is when one quits something because of defeat.” The third session of OEC Summer Dialogue will be held in the near at a different venue. After the successful completion of the SUMMER DIALOGUE, a document will be drafted for “OEC Vision 2040”.