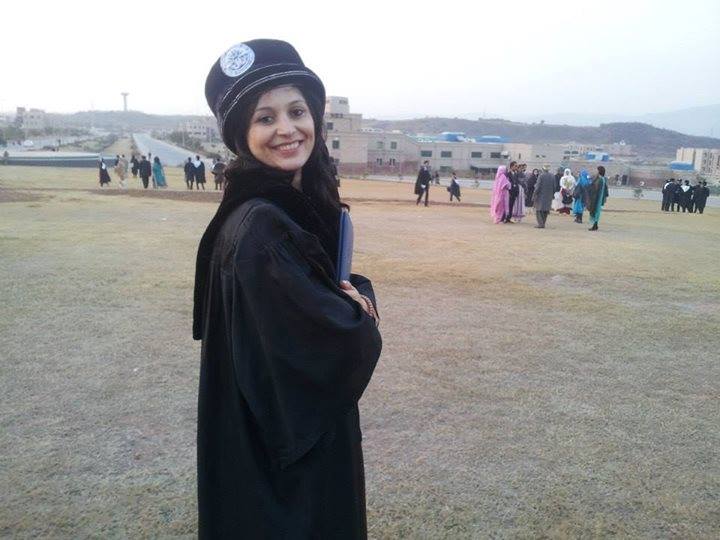 “I’m from the remote, beautiful and peaceful valley of Punial, Ghizer. Throughout my early life, my father, a kind and intelligent man, emphasized to me the importance of my education. He believed in educating women, and was a great supporter of education in general. As a child, I was admitted to the Aga Khan Jubilee School, Buber. Afterwards, I took admission at the AKHSS, Ghizer, receiving the top score its entry test. I was later awarded Presidential Gold Medal Aizaz-e-Sabqat for earning the highest score in the SSC examination throughout Gilgit Baltistan.

Upon completion of my secondary schooling, I decided to leave my family in order to pursue higher schooling in Islamabad. Leaving a close-knit family in order to start a new life in a big, unfamiliar city was not an easy undertaking for me, but I remained strong and focused on my goals.

Early in my first year [Intermediate] of study, however, an urgent message summoned me home, and upon my return to Gilgit I was met with the unbearable news; my beloved father had had a fatal heart attack. Out of his meager income he had managed to find enough money to send me to the capital [Islamabad] for a better education, but after so many years of encouragement, he could not stay to witness me fulfill his dream(see me find success in the engineering field). At that moment I realized I had two options: I could bury my father’s dream with him, and drop out of college, or I could fight to hold onto this dream and continue my studies in spite of the new hardships I would face in his absence. With encouragement of my mother (the only source of guidance and inspiration I was left with after that my father was gone), shortly after my father’s funeral rituals had been performed, I made the decision to return to Islamabad to continue my studies

In 2008, I got enrolled in NUST, Islamabad. I received scholarships from the Aga Khan Education Services, Pakistan and the Hashu Foundation. While at NUST, I was given the opportunity to study in the U.S. at North Dakota State University in Fargo, North Dakota. During my stay in the U.S, I gravitated towards work on renewable energy therefore, upon my return to Pakistan I decided to pursue a career in the this field. Luckily I found a short-term position for a solar project at a university. There is no doubt that, even today, working in the energy sector is still considered a man’s job. Gender became my biggest hindrance as a female engaged in the energy sector.

Out of all of my other struggles thus far, that phase [Job search after the completion of the short-term project mentioned above] of my life was especially painful and challenging, as I fought for financial survival and against the despair of being forced by necessity to sacrifice a profession that I loved. Then, just as I had begun to resign myself to letting go of my dreams, I got the position of Solar Design Engineer at a solar energy company in Lahore. I worked with that energy firm in Lahore for a time, and left Lahore to Islamabad to work with Henergy, a global company and manufacturer of thin film technology where I finally got the chance to install my first solar project. Currently, I’m working at the Reon Enegy Solutions, Lahore as its Lead/Engineer- Planing and Costing.

My mission in life is to avail myself to every opportunity, so that nothing is left unlearned. I started the campaign Renewable Energy Journey, Pakistan. The campaign #REJourneyPakistaninvites everyone to join the “Renewable energy revolution,” and aims to enrich learning opportunities for youth who are interested in the new and developing technologies in the renewable energy sector. I want to provide inspiration to young women, as a demonstration of what we are capable of when we dare to pursue our dreams, against all odds”

Note: To read stories from The Heros Within Series One originally published at Educure, please visit
http://bit.ly/2y6HnD3