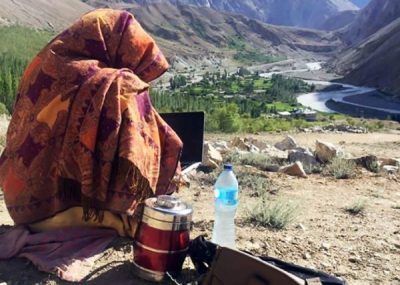 It is said that whenever unprecedented times of difficulty and strife come along, the inequalities become clearer. Those already vanquished by the comparative imbalance in the resources available to them are hit by much worse consequences. Such is the plight of the citizens of Gilgit Baltistan in Pakistan, facing the COVID-19 situation. Students, in particular, are suffering greatly as a result of the lock-down situation because how is Digital Learning possible when there is a huge Digital Divide in the country, waiting to be addressed for years and years?

It is unfortunate how we, Pakistanis, take immense pride in the beauty of the snow-covered peaks, the enormous glaciers, the breathtaking lakes and rivers of Gilgit Baltistan and yet we are unable to support our fellow brethren in their cause to attain one of the basic citizenship rights [according to Article 19(A) of the Constitution of Pakistan: Right to Information]. There’s no second thought to the fact that a huge contributor to Economic Growth in our country is the very patriotic and talented Gilgiti youth’s hard-working capabilities in mainland Pakistan. The resources extracted from this mineral-rich land are substantial. Much of the tourism-friendly impression of our country largely depends on the same region, and even the agricultural yield from GB has been significantly adding to our GDP. The youth of GB have had enough of this lack of infrastructure development in their region, and have recently resorted to a social media movement by the hashtag #internet4gilgitbaltistan. They have a comprehensive manifesto of demands that they want to be addressed by the government, with the goal being stable and faster internet connectivity to all.

A lot of the criticism being projected onto this movement comes in the form of allegations such as “anti-state propaganda”, or “publicity stunt”. However, what is often not taken into consideration is the fact that there is only one Internet Service Provider in the GB region and that is the Special Communications Organization (SCO). Due to it being the only firm in the business, it is unwilling to take up the responsibility of being held accountable for its below standard services and GBians can not take it anymore. The primary motive for this campaign is to overcome the Digital Divide faced by the GB people, and so they demand that either SCO improves its services to be at par with that provided by other telecommunication companies in the rest of the country, or let the industry become competitive for quality services to come along. They demand that the Section 39 and 40 of the Pakistan Telecommunication Re-organization Act must be omitted or amended as it ensures a complete monopoly in the region by the military-backed SCO, which is believed to have been driving out competitor firms for a long time.

The issue is contentious indeed but in this era of information and digitization, we need to bridge the gap for all our country’s citizens to benefit from. Fighting for basic rights should not be so hard, and this injustice must come to an end soon.